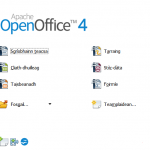 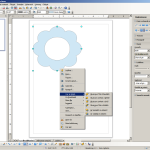 This is an office software suite but before we go any further, we don’t recommend you use it. Leaving aside the brouhaha between Oracle and the community, OpenOffice is these days developed by the Apache foundation but it’s far behind (in development terms) LibreOffice (which is based on the same code) because most of the community upped sticks back then and went over to LibreOffice.

If you’re preference is OpenOffice nonetheless, that’s ok, it won’t harm your system. It’s just a bit behind LibreOffice. But whatever you do, don’t download the version on the Education Scotland website. We told them several times that 3.0.1 (we’re on 4.0 just now) is not the most recent version but for some reason, they won’t update the link. There are various reasons for using the latest version of software in general but the main issue with 3.0.1 is that they forgot to add Gaelic as a locale (a setting that makes the program realise Gaelic exists) – which makes spellchecking almost impossible.

The latest version is available (free of charge) on the Apache website. You want the one that says full install.